Seven experts and clinicians compared the benefit-safety balance of six over-the-counter (OTC) pain-killers on three favourable effects:
​
​They also considered eight unfavourable effects, but only three showed any clinically relevant differences among the six drugs. The first two are serious or non-serious gastrointestinal effects (each taking account of incidence rate and severity), and the third is potential for toxic overdose (either accidental or deliberate).
The options
​The total benefit-safety balance is shown here on a 100-point scale. Green best; Red worst.​​
​The numbers represent the overall added clinical value of each drug. They take into account available data for the effects and judgements by the experts about the clinical relevance of the effects.​​

After the favourable effects have been weighted for their added clinical value, they are described as benefits.  For the unfavourable effects, the inverse of their weighted loss-of-value is referred to as safety.  The resulting benefit-safety balance does not consider contra-indications, interactions with other drugs, or any precautions.
Bar graphs
Separate contribution of benefits and safety to the totals show different profiles.  For example, ibuprofen and diclofenac show similar total scores, 57 and 54, but ibuprofen is safer and diclofenac is more beneficial. 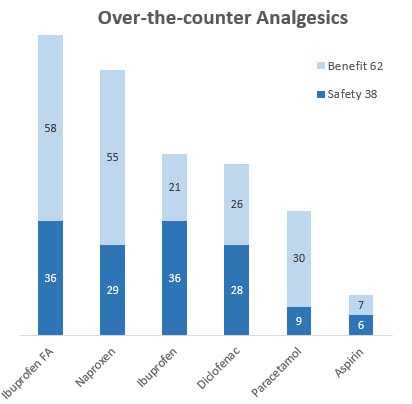 Benefits versus safety
Another way to look at the benefit and safety information is to show each drug' two assessments before the 62-38 weights are applied. 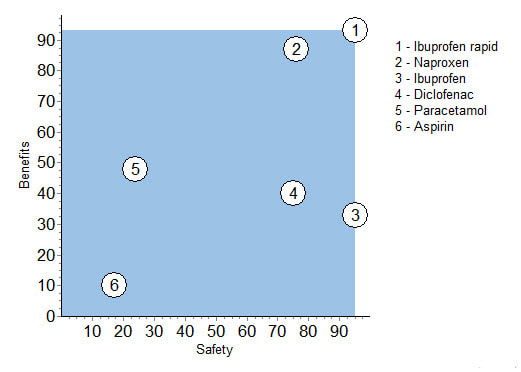 ​To support patient-oriented prescribing based on the evidence, green shading identifies the best drug for each favourable effect and red shading the worst drug(s) for each unfavourable effect.

Pain relief: proportion of patients suffering moderate to severe pain who individually report pain intensity reduction by 50% or more.
Note that the weighted scores are relative and zero does not mean no value, so only differences between numbers, not their ratios, make sense for comparing the clinical value they represent.
Source: Schug S, Pogatzki-Zahn E, Phillips LD, et al. Multi-Criteria Decision Analysis to Develop an Efficacy-Safety Profile of Parenteral Analgesics Used in the Treatment of Postoperative Pain. Journal of Pain Research 2020; 13: 1969-77.
Note that diclofenac is no longer available in the UK without prescription.