They identified seven unfavourable effects, but only three, constipation, dry-mouth, and dizziness, showed clinically relevant differences (taking into account incidence rate and severity) among the drugs they considered.
The options
The total benefit-safety balance is shown here on a 100-point scale. Green best; Red worst.
​The numbers represent the overall added clinical value of each drug. They take into account available data for the effects and judgements by the experts about the clinical relevance of the effects.​
Reductions in the frequency of OAB symptoms define each drug's favourable effects, and frequencies of side effects are classed as unfavourable effects. After the favourable effects have been weighted for their added clinical value they are described as benefits.  For the unfavourable effects, the inverse of their weighted loss-of-value is referred to as safety.  The assessments do not consider contra-indications, interactions with other drugs, or any precautions.
Bar graphs
Separate contributions of benefits and safety to the overall totals show different profiles.  For example, the three drugs scoring lower than the placebo are all less safe than the placebo, but their benefits are insufficient even to bring their total score above that of the placebo. 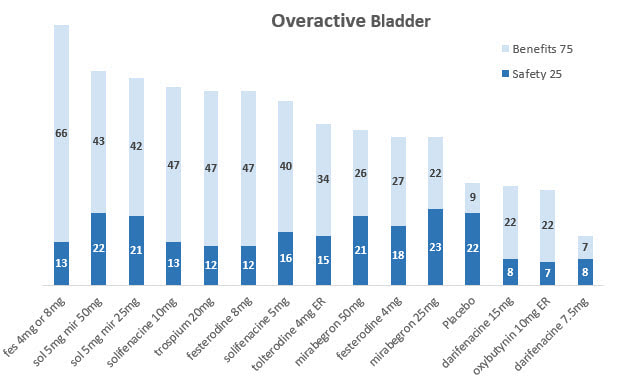 Benefits versus safety
Another way to look at the benefit and safety information is to show each drug's two assessments before the 75-25 weights are applied. 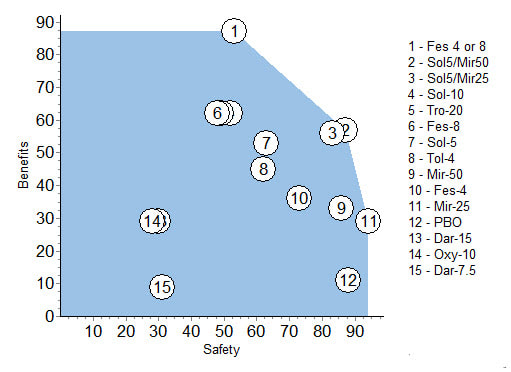 This figure facilitates comparisons of the drugs.  The top rating of fesoterodine 4 or 8 (flexible dosing) is due to its high-scoring benefits, while the two solifenacine/mirabegron combinations are safer, but lower in benefits.

​Note that flexible dosing of fes 4 or 8 is more beneficial and safer than 4, 5, 6, 13, 14, and 15, while the sol/mir combinations are more beneficial and safer than most of the remaining drugs.  In other words, only fes 4 or 8 and the sol/mir combinations are better than all other drugs for their benefits and/or safety.
Effects Table
All the above is based on the following data, culled from available public sources, and experts' weight assessments about the clinical relevance of the evidence.  To support patient-oriented prescribing based on the evidence, green identifies the best drug for each favourable effect and red the worst drug for each unfavourable effect.

%delta is the reduction in number of episodes over a 24-hour period.
​% is the percentages of patients who experienced the side effect.
Note that the weighted scores are relative and zero does not mean no value, so only differences between numbers, not their ratios, make sense for comparing the clinical value they represent.
Pfizer initiated this project and Pierre Fabre supported it.
​Source: Chapple CR, Mironska E, Wagg A, et al. Multicriteria Decision Analysis Applied to the Clinical Use of Pharmacotherapy for Overactive Bladder Symptom Complex. European Urology Focus 2020; 6: 522-30.